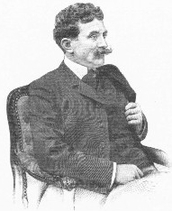 Born 21st September 1867 in Bayonne where he died on the 3rd April 1952.
Etcheverry was a pupil of Achille Zo at the municipal school of design and painting of Bayonne, and of Leon Bonnat and Albert Maignan at the Ecole des Beaux-Arts in Paris. Initially Etcheverry painted historical subjects, but he soon turned to portraits and genre scenes. The success of his ‘Vertigo’ in 1903 earned him a considerable reputation. A skilful draughtsman and successful colourist, he was considered by many to be one of the best painters of his period. As a pupil of Bonnat he was seen by the Parisian art critics to be a member of the ‘Bayonne School’. He was appointed a professor at the Ecole Speciale academie des Beaux-Arts, was invited to join the jury of the Salon des Artistes Francais in 1927 and was awarded the Legion d’Honneur in 1906.
In 1892 Etcheverry came second in the Grand Prix de Rome with his painting ‘Philemon and Baucis’. He exhibited regularly in Paris at the Salon des Artistes Francais, of which he became a member. In 1895 he won a third class medal, a second class in 1899 and a gold medal in 1900. [source]
more >
1