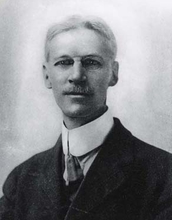 Mowbray was born of English parents at Alexandria, Egypt. His father, George M. Mowbray, was an expert in explosives. Left an orphan, the son was taken to America by an uncle, who settled at North Adams, Massachusetts. After a year at the United States Military Academy at West Point, he went to Paris and entered the atelier of Leon Bonnat in 1879, his first picture, Aladdin, bringing him to public notice. He studied with Bonnat until 1883. In 1886, he became a member of the Society of American Artists. His painting Evening Breeze received the Clark Prize at the National Academy of Design in 1888, and he was elected to associate membership in the Academy. He was made a full member of the Academy in 1891.

Subsequently Mowbray was best known for his decorative work, especially The Transmission of the Law, Appellate Court House; ceiling for the residence of F. W. Vanderbilt; the ceilings in J.P. Morgan's Library and The Morgan Library & Museum's Annex building; as well as the ceiling and walls of the library of the University Club, all in New York City. This last was executed in Rome, where, in 1903, he was made director of the American Academy. Other works include murals in the Appellate Courthouse and the University Club library in New York; the homes of C.P. Huntington and Larz Anderson; and the Howard M. Metzenbaum U.S. Courthouse in Cleveland, Ohio. He taught at the Art Students League of New York circa 1901. He was a member of the U.S. Commission of Fine Arts from 1921 to 1928. [source]
more >
3