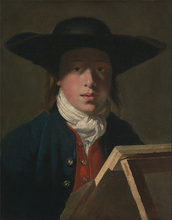 Henry Robert Morland (1716/1719 – 30 November 1797) was an English portrait painter, best remembered for a portrait of King George III, and for being the father of the animal painter George Morland.

His father was the genre painter George Henry Morland, and Henry Robert followed an art career as well, becoming a painter of portraits and domestic subjects, in both oil and crayon.

He exhibited some 118 works from 1760 to 1791 at the Society of Artists, the Free Society, and the Royal Academy. Morland also engraved in mezzotint, restored paintings, and sold artists supplies, including crayons that he made himself.

Morland was for a time very successful and even painted a portrait of George III, the king sitting in person. Although he became quite wealthy for a time, he lost most of his money, and was often bankrupt in later years.

He died on 30 November 1797 at Stephen Street, Rathbone Place, London, after having led an unsettled life. [source]
more >