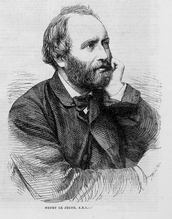 Henry Le Jeune was born in London, the son of Anthony Le Jeune, a professional musician of Flemish origin, and the third of five children. After showing an early interest in art he was encouraged by his family to study the art collections in the British Museum.

In 1834, Le Jeune was admitted to the Royal Academy where, after winning 4 silver medals in succession, he won a gold medal in 1841 for the biblical painting "Samson Bursting his Bonds" (exhibited the following year at the British Institution). He first exhibited at the Royal Academy in 1840 with a work entitled "Joseph Interpreting the Dream of Pharaoh's Chief Butler".

From 1845-48 he taught at the Government School of design at Somerset House, and from 1848-64 was curator and instructor at the Royal Academy. He was elected an Associate of the Royal Academy (ARA) in 1863 and an honorary retired associate in 1886. [source]
more >
3