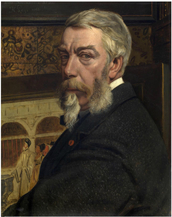 Jan August Hendrik, Baron Leys (18 February 1815 – 26 August 1869), also known as Henri Leys, was a Belgian painter and printmaker, who was a leading representative of the historical or Romantic school and a pioneer of the Realist movement in Belgium.

Henri Leys was born and died in Antwerp. He studied under Mattheus Ignatius van Bree (1773-1839) at the Royal Academy of Fine Arts in Antwerp and then with his brother-in-law Ferdinand de Braekeleer (1792-1883).

At the start of his career, Leys worked with the Belgian Romantic painter Egide Charles Gustave Wappers (1803-1874). Both artists were interested in nationalistic subjects painted in styles that owe much to the example of 16th- and 17th-century Flemish painting. In 1835 Leys went to Paris where he visited the studio of Eugène Delacroix and met Paul Delaroche. The influence of Delaroche'd Romanticism is evident in Leys' early work.

From the 1840s, Leys distanced himself from the pathos and historical anecdotes of the Romantic school. He began painting scenes set in 16th-century Antwerp, combining details studied from life with a deliberately archaising style reminiscent of 15th and 16th-century Flemish and German painting. He abandoned the bravura technique inspired by Rubens in favour of line, shape and local colour.

Many of the paintings from this period depict specific historical subjects, while others were genre scenes or portraits. This development towards Realism made him one of the pioneers of this artistic movement in Belgium.[1] With these works, he earned a following among many younger artists in Belgium as well as a considerable reputation in France, where he won a gold medal at the International Exhibition in Paris in 1855 for his historical painting The Mass of Berthal de Haze (Royal Museums of Fine Arts of Belgium, Brussels).

In 1862 Leys was created a baron by the Belgian King Leopold I. At the request of the Belgian government, which supported the development of history paining in the country, the Antwerp city administration gave Leys a commission to decorate the interior of the restored Antwerp Town Hall. He was asked to paint over a period of 10 years 10 monumental murals depicting key events in the city's history. Four of the murals along with 11 portraits of historical rulers of Belgium were completed between 1863 and 1869, the year in which Leys died. [source]
more >