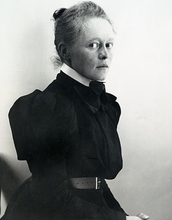 Helena Sofia (Helene) Schjerfbeck (July 10, 1862 – January 23, 1946) was a Finnish painter. She is one of Finland's most-cherished modernist painters. She is most widely known for her realist works and self-portraits, and less well known for her landscapes and still lifes. Throughout her long life, her work changed dramatically beginning with French-influenced realism and plein air painting. It gradually evolved towards portraits and still life paintings. At the beginning of her career she often produced historical paintings, such as the Wounded Warrior in the Snow (1880), At the Door of Linköping Jail in 1600 (1882) and The Death of Wilhelm von Schwerin (1886). Historical paintings were usually the realm of male painters, as was the experimentation with modern influences and French radical naturalism. As a result, her works produced mostly in the 1880s did not receive a favourable reception until later in her life.