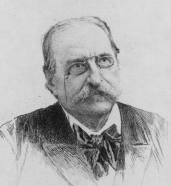 His Italian father, a professor of singing, was first an engraver before becoming an industrial designer for a jeweler. [1] When he was 30 years old, a serious illness forced him to go away from Paris. He then started to draw and paint plants, insects and birds around his new and spectacular house. Making lots of money in Paris, he developed a passion for the work of Auguste Raffet, which he published the catalog "racist" in 1862. He worked with Gustave Doré, for which he composed ornaments like "The Holy Bible according to the Vulgate", published in 1866. He contributed drawings to several newspapers, such as Le Monde illustré, Le Magasin pittoresque, and L'Illustration. He also privately illustrated books that brought him wealthy bibliophiles. He was one of the organizers of the exposition of the century prints of 1887 and Section retrospective of Fine Arts, and the Universal Paris Exposition of 1889.