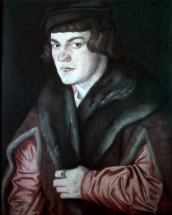 Surrounded by physicians, lawyers, and scholars, Hans Baldung Grien (b. about 1484, possibly Schwäbisch, Germany - d. 1545, Strasbourg, France) was one of the first German artists from a learned family. He first studied in Strasbourg or Swabia around 1499. While in Albrecht Dürer's Nuremberg workshop from 1503 to 1507, he was nicknamed "Grien," probably after his favorite color, green, and to distinguish him from other apprentices named "Hans." Two years later he settled in Strasbourg, becoming a wealthy property owner active in civic affairs. From 1512 to 1517, Baldung moved to Freiberg im Breslau to paint its cathedral's eleven-panel altarpiece , still in place today.