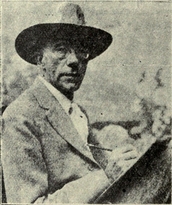 Printmaker, painter. While still a young boy, Baumann emigrated with his family from Magdeburg, Germany, to Chicago. He returned to Germany to study at Kunstgewerbeschule in Munich and later attended the Art Institute of Chicago. After moving to Santa Fe in 1918, he became a leading member of the art community, respected for services he performed on behalf of his colleagues and for his experiments in a wide variety of media. Baumann was appointed area coordinator of the Public Works of Art Project of the Works Progress Administration beginning in the early 1930s. During this time, he also carved and decorated a large number of marionettes, with which he and his wife and other artists toured the state, acting out Hispanic and Indian folk stories. In 1939, he published Frijoles Canyon Pictographs, illustrated with woodblock prints of prehistoric Indian designs and figures carved in the canyon walls. Later he incorporated such anthropological imagery into his art.