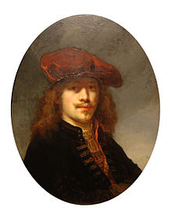 Govert Flinck (1615-1660)
Govert Flinck’s style was at first extremely close to that of Rembrandt. His early works are so similar that collectors once bought them as Rembrandts. He produced portraits and history paintings, much like Rembrandt. It was only later that he moved towards the smooth, elegant style of Bartholomeus van der Helst. The change proved successful, leading to a commission from Amalia van Solms for a commemorative allegory honouring the late stadholder Frederik Hendrik in 1656. Flinck’s contacts among Amsterdam’s patrician families led to commissions from the Harquebusier civic guard, including a group portrait featuring Captain Albert Bas. For Amsterdam’s new town hall, Flinck was commissioned to paint on the theme of the Batavian revolt against the Romans. Unfortunately, he died before completing the series. Dutch poet Joost van den Vondel wrote several poems to accompany Flink’s pictures. He called him the Apelles of Cleve – comparing the work of Flinck, a native of Cleves, to that of the legendary Ancient Greek master, Apelles.
more >
3