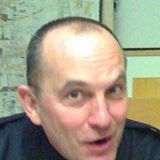 Giocampo (a pen name for Giovanni Camponeschi) was born in Rome on April 3, 1952. He graduated from the Rome Fine Arts School in 1969 and in the following three years attended the Painting Academy in Via Ripetta and the faculty of Architecture at Valle Giulia. Among his teachers of figurative arts were Gentilini, Montanarini, and Cordio. At the same time he participated, in 1970, in a few group exhibitions, including “Cento Pittori in Via Margutta” (One Hundred Painters at Via Margutta).

After a while Giocampo’s interest turned to the theater, where he played as an actor with national companies for thirteen years, and also acquired a significant experience “behind the scenes”, mainly in staging and costumes.

Later on he lived an important religious experience, where he enjoyed four years of philosophical-theological studies at the “Antonianum” Institute in Rome.

Very recently he has picked up the brushes again, favored by the peace and quietness of the Alban Hills near Rome, where he lives.
more >
5