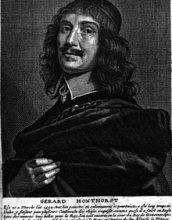 Gerrit van Honthorst's (b. 1590, Utrecht - d. 1656, Utrecht) night paintings caused such a sensation in Rome that he was known as Gherardo delle Notti (Gerard of the Night Scenes). An Utrecht native and son of a painter of tapestry cartoons, Honthorst's reputation was made with these nocturnal pictures, usually religious subjects. A single candle served as the light source whose rays were shielded by the figures. The lighting was derived from Caravaggio's works, and Honthorst's role in bringing knowledge of Caravaggio and his followers to the North was critical; many painters, including Rembrandt van Rijn and Georges de la Tour, were influenced by Honthorst's Caravaggesque pictures. After nearly ten years in Rome, Honthorst settled in Utrecht in 1620, where he soon abandoned his Caravaggesque manner and adopted a much lighter palette. In 1628 he was called to England to paint the royal family. There he began his second, court style, painting portraits in the manner of Anthony Van Dyck. Honthorst spent the rest of his career as court painter at The Hague, where he largely devoted himself to portraits, becoming one of the few seventeenth-century Dutch artists to earn an international reputation. He also painted large-scale, decorative works influenced by Peter Paul Rubens and the Carracci.

Artworks will show up here.