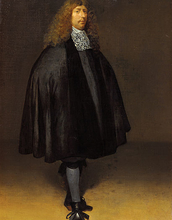 Gerard ter Borch (1617-1681)
Originally from Tilburg, Adriaan de Lelie taught himself to paint, although in his early years he seems to have learned much from fellow townsman Cornelis van Spaendonck. In 1773, De Lelie and Spaendonck travelled to Antwerp together. There De Lelie specialised in history paintings and portraits. To perfect his portrait technique, he copied Rubens and Van Dyck portraits at Dusseldorf’s Electoral Gallery. On the advice of friends, in 1783 De Lelie moved to Amsterdam. There he was soon much in demand, especially in progressive circles. Many leading contemporaries in Dutch cultural life commissioned De Lelie to paint their portrait. His pictures of people visiting art galleries are the precursors of the conversation piece which became popular in the nineteenth century. De Lelie also painted domestic interiors, yet without the idealised ambience and symbolic references that often characterise similar paintings of the 17th century.
more >
2