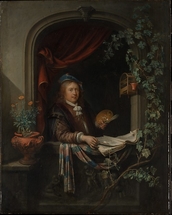 Gerard Dou (1613-1675)
As the son of a glass engraver, Gerard Dou began by learning to engrave and paint glass. In 1628, he was apprenticed to Rembrandt. Here Dou learned the art of chiaroscuro, the contrast of light and shade which became his speciality: his candlelit scenes became all the rage. Dou’s genre paintings also sold for high prices. His meticulous style was highly influential. Followers included his pupil Frans van Mieris, a leading Leiden fijnschilder. In 1665, Dou presented work in a one-man exhibition at the home of artist Johannes Hannot, featuring no less than 27 of his paintings from the collection of fellow townsman Johan de Bye. Dou enjoyed an international reputation: various kings and princes acquired work by him. Yet despite offers of appointments to royal courts abroad, Dou never left Leiden.
more >
4