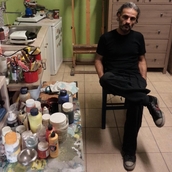 George Pappas is an abstract expressionist artist mainly focused on the automatic and subconscious creation. He lives in Greece and exhibits his work in Athens, Paris and NY. He holds a Bachelor Degree in Economics from The American College of Greece and has an additional education in music, creative writing and Visual Arts. From childhood, he spent most of his time painting, writing poetry and composing music. He took his first painting lessons from ABC de Paris at the age of seven. As a teenager he took classical guitar lessons at the music school of Andreas Papadatos. After high school he formed “Karma” an experimental alternative rock band with English poetic lyrics. When he graduated from the university, in 1996, Live Records published one of his band songs in a collection of 18 Greek rock bands. His first painting exhibition was later in Paris at the Slick Art Fair in 2010. In 2011, he took part in two group exhibitions of Caelum Gallery in the Chelsea district and at the Pool Art Fair in Manhattan, New York. He had his first solo show in 2015 in Piraeus were he merged music, poetry and Visual Art. During the same period (2010-2014) he studied in parallel Visual Art. His first poetry collection “Poems of the mother tongue - Poems of the other Tongue” was published in 2016.

Apart from his aesthetic approach his work is strongly influenced by conceptualism and symbolism. Merged with philosophical concepts, literature, poetry and music many of his artworks attempt to expose visually his manifesto called “Elixism” (published on February 2010). The purpose of Elixism is to illuminate how the opposite forces and contradictory meanings synthesize to coexist at a higher level. The term he uses for his art is: “Visual Musical Literal Art”.
more >
2