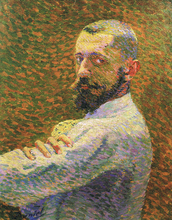 George-Daniel de Monfreid (14 March 1856 – 26 November 1929) was a French painter and art collector. He was born at New York, in the United States, but spent his childhood in the south of France. Early he decided on a career in art, and enrolled at the Académie Julian, and formed friendships with Paul Gauguin, Verlaine and Aristide Maillol.