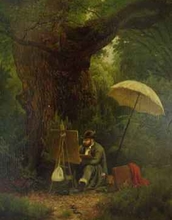 Hall was the son of the Koblenz City writer Otto Philipp hall. After initial lessons from no longer detectable teachers he could 1836/37 as a draftsman in the reconstruction of the ruins Stolzenfels participate. A little later, his first paintings were created. 1842-1846 he studied as a free student with Hans Gude at the Düsseldorf Academy at Johann Wilhelm Schirmer landscape painting and the first year architecture class of Rudolf Wiegmann . Traveling at this time led him to the Eifel, on the Lahn and to the Black Forest. Gude and Andreas Achenbach should have aroused his interest in Norway. In 1847 he undertook with August Leu and August Becker a five-month study trip to Norway (Christiania, Sognefjord , Gudvangen, Hardangerfjord, Jotunheimen, Bergen). Then took him Wilhelm von Schadow at the master class. His now generated in the studio Norway Pictures won him fame and recognition.

In 1848 he moved to Heidelberg . In 1850 he embarked on another journey to Norway (Sognefjord, Jostedalsbreen). In 1852 he traveled to Switzerland, in 1853 to Bavaria. Is rather unlikely that he visited Greenland, which is found in paintings of. 1852 He married on October 16, 1852 Susanne Lang, with whom he had two children. 1852/53 he moved to Baden-Baden , where he had the main residence until his death. In 1853 he received the title of Grand Duke of Baden court painter. Since 1857, he had a second home in Paris . From here he came in 1858 to Barbizon , where he "learned to see more than ever" in his own words. His third trip to Norway took place in 1854 (Romsdal, Hammerfest ) and took him to the North Cape. He also traveled in 1864 from Savoy and England.

He died of a stroke. His grave is located at the city cemetery of Baden-Baden. [source]
more >
11