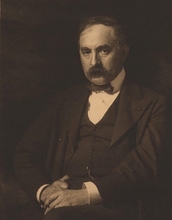 Julius Garibaldi Melchers (August 11, 1860 – November 30, 1932) was a well-known expatriate genre and portrait painter at the turn of the century. The son of a Westphalian sculptor, Julius Theodore Melchers (1828-1908), Gari studied with his father before enrolling in 1877 at the Düsseldorf Royal Art Academy, where he studied with Karl von Gebhardt (1839-1925). Four years later he moved to Paris to study at the Académie Julian with Gustave Boulanger (1824-1888) and Jules Lefebvre (1836-1912). He exhibited for the first time at the Paris Salon in 1882 and then visited Italy By late 1884 he had established a studio in the Dutch fishing village of Egmond-aan-Zee, on the North Sea. Despite frequent trips to other parts of Europe and to America, Melchers would consider Holland to be his home until 1909.

In 1888 a solo exhibition of his work was organized in Detroit, and he continued to participate at the Paris Salon and in international expositions, winning numerous awards including the Legion of Honor in 1895 and the Royal Prussian Order of the Red Eagle in
1907. He established his reputation with genre scenes of Dutch peasants, often presenting them in church interiors or in mother-and-child groupings recalling the Virgin. Responding to the work of the impressionists, Melchers developed a more decorative style, with a lighter palette and thicker surface. At the turn of the century he also produced religious paintings. Lesser known are his portraits; Melchers received commissions from a number of wealthy and notable patrons, including Theodore Roosevelt, 1908 (Freer Gallery of Art, Smithsonian Institution, Washington, D.C.). He also painted murals for the World’s Columbian Exposition, The Arts of Peace and War, 1892-93 (Library, University of Michigan, Ann Arbor), and the Library of Congress, 1895. In 1909 Gan Melchers accepted an invitation from the grand duke of Saxe-Weimar to teach at the academy in Weimar, and he lived in Germany until the outbreak of World War I forced him to return to the United States. After briefly working in New York, he settled permanently at Belmont, an estate in Falmouth, Virginia. During these last years he continued to paint genre scenes and receive important commissions for portraits and murals. In 1921 he painted murals depicting the early history of Detroit for the city’s public library and the following year received a similar commission for the Missouri State House. Belmont, his home, became a memorial to him in 1955, when the house and its collection were given to the state of Virginia.