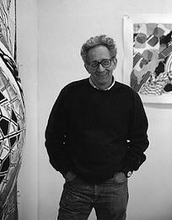 Frank Stella (born May 12, 1936) is an American painter and printmaker, noted for his work in the areas of minimalism and post-painterly abstraction.

Began to paint abstract pictures while at Phillips Academy, Andover. Studied history at Princeton University 1954-8, also attending painting courses there under William Seitz and Stephen Greene; influenced by Pollock and Kline, later by Newman and Johns. Moved to New York in 1958. In reaction against Abstract Expressionism, painted in 1958-60 a series of black pictures with the entire field covered with regular bands, followed in 1960 by an aluminium series, his first shaped canvases. First one-man exhibition at the Leo Castelli Gallery, New York, 1960. A friend of Andre and Judd and had considerable influence on the development of Minimal sculpture. Next made several series with more radically shaped formats and some with multi-colours. Painted 'Irregular Polygons' 1966-7, then 'Protractor' series with interlaced colour bands and sometimes fan-like formats. His later work has included paintings with cut-out shapes in relief. Lives in New York.
more >
2