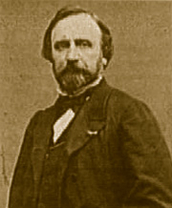 Léon Benouville first studied with his elder brother Jean-Achille Benouville (1815–1891) in the studio of François-Edouard Picot before he transferred to École des Beaux-Arts in 1837. Like his brother he received the Prix de Rome in 1845. In Rome, as a Prix de Rome pensionary at the Villa Medici. His works produced in Rome are influenced by early Christianity and often show representations of antiquity. [source]
more >