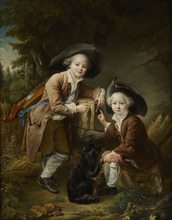 François-Hubert Drouais (Paris, 14 December 1727 – Paris, 21 October 1775) was a leading French portrait painter during the latter years of Louis XV's reign. His clientele included the French royal family and nobility, foreign aristocracy, fermiers-généraux (tax farmers), and the wealthier members of Parisian society and their favourites. But it was his increasing popularity at the French court that expanded his clientele and made his portraits a fashionable necessity. Drouais’s work was admired during his lifetime, and his popularity and clientele did not diminish from the occasional adverse judgement published in Salon reviews.

Drouais was apprenticed successively to his father Hubert Drouais, Donat Nonnotte, Charles-André van Loo, Charles-Joseph Natoire, and François Boucher. He was received into the Académie royale in 1758 with his morceaux des réception portraits of the celebrated sculptors Edme Bouchardon (1698–1762) and Guillaume II Coustou (1716–77). Both portraits were exhibited at the Salon of 1759 and received praise. Drouais attended the meetings of the Académie royale and, from 1755 until his death in 1775, exhibited regularly at the official Salons held in the Louvre in Paris.

Drouais was a favourite portrait painter of Jeanne Beçu, comtesse du Barry (1743–93) and, from 1772 until his death, held the position of premier peintre to Louis-Stanislas-Xavier, comte de Provence (1755–1824), known as Monsieur, later Louis XVIII. Mesdames de France, the daughters of Louis XV, were also important patrons. They recommended him to their father, Louis XV, when a portraitist was sought to travel to Vienna to paint the young Marie-Antoinette. Drouais was approached, but his commission fee was regarded as too high. Ducreux went instead.