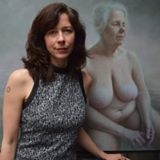 Francien Krieg (1973) lives and works in The Hague, The Netherlands.

In the studio of Francien Krieg a glass is displayed with bird skulls and a small fetus in a jar. It is noticeable that transience of nature intrigues her. In the work of Krieg the theme of transience concentrates on the naked body of elderly women. Krieg paints the naked woman unpolished and realistic, as a pure human being. The beauty of imperfection becomes clear in her raw, poetic art and has the capacity to touch the observer.

Krieg always painted human beings. At first she was intrigued by the form of the human body, but gradually her fascination with the texture and the colors of the human skin increased which is expressed in her realistic style. She tried once to show the inner side of human beings, but that did not appeal her. 'I think the inside is bloody and nasty, while the outside is interesting for me. The wrinkles and varicose veins of the elderly are to most people an illustration of imperfection, but to me they depict beauty.

According to me, a smooth, polished skin is less interesting then an aged skin. Painting the unpolished, aged skin is a way to express the inside.'

The fascination for the human body started when she became aware of the strangeness of her own body when she took a shower. She took a good look at herself and thought 'what a strange object is this!'. This experience stimulated her to paint her own body. 'Your own body is familiar and strange at the same time. For me it is bizarre that on one hand I feel comfortable in my body, while on the other hand I have no awareness of what is going on inside. Even medical science is unable to understand the inside of the human body completely.'

Another fascination of Krieg is the way females are portrayed in the media. She is annoyed at the way the media create an idealized picture of women. As a counterpart of this idealization she aims to show natural and unpolished women. One of the purposes of Krieg is to stimulate critical questioning of the definition of beauty instead of a groundless acceptance of an imposed definition of beauty. Personality characteristics as openness and honesty also contribute to outward beauty.

translated from a text from Hanneke Wetzer
more >
7