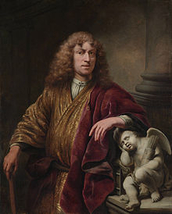 Ferdinand Bol (1616-1680)
The artist Ferdinand Bol grew up in Dordrecht. He learned to paint either there or in Utrecht under the artist Abraham Bloemaert. Later, Bol worked for a period at the studio of Rembrandts in Amsterdam, before setting up as an independent artist in 1642. Bol mainly produced portraits and history paintings. At first his work resembled Rembrandt's, but after 1650 he developed a more colourful and elegant style. Bol received numerous commissions, including for the Amsterdam town hall and the Admiralty. After 1669 and his second marriage to Anna van Arckel, Bol, now a wealthy man, hardly painted anymore. His self portrait of the late 1660s is one of his last works.
more >
2