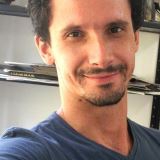 Fabiano Millani was born in São Paulo on June 27, 1981, but he was raised in Rio Grande do Sul.
Millani began his early career in 1997, when he took a course in artistic drawings with Edegar Cavalheiro. Such experience drove him forward his persistent search for realism.
In 1998, he started his career in plastic (visual) arts at the same time in which he first taught a course on drawings in the city of Santo Ângelo. In 2003, Millani broadened his horizons, and he won the 3rd place in a state contest named “Descobrindo Talentos” with the work “O Executivo”. Yet in 2003, he fell in love with the paints and he took a course on contemporary painting with the visual artist Tadeu Martins.
In 2004, he won the 2nd place in the contest “80 anos da Coluna Prestes” with the painting “Cartas vermelhas”. At that time, Millani widened his course of action to other cities in the state of Rio Grande do Sul, as well, and taught at the 7th Academic Week of Arts, Communication and Music (“VII Semana Acadêmica de
Artes, Comunicação e Música”) in the University of Passo Fundo (UPF).
In search of new challenges, Millani started in 2005 his first works on the figurative style, painting several canvases inspired on his daily life experiences. In this context, he was invited to paint an artwork called "Cristo na Cruz", his first 9-meter high monument, in the city of São Valentim do Sul (RS).
As a characteristic evolution in his artistic visual works, he won in 2006 the 1st place in the painting contest referring to the 61st anniversary of the creation of the first Batalhão de Comunicações de Santo Ângelo. In 2007, as an ongoing retribution to his talent, his work named “Meu pequeno anjo” is portraited in ACRILEX Annual
Calendar. In 2008, he won the 1st place in a painting contest in Depósito de Subsistência de Santo Ângelo (DSSA), and, in 2009, he is innovative in winning the 1st regional place in SESI’s Descobrindo Talentos with the sculpture (ENTRE –
PARENTESES).
In 2009, Millani built his studio, where he works mainly in visual arts and as a painting and drawing teacher. Some recent achievements were the 1st place in the Dessiner Wordpress National Contest on Realistic Drawings, with the work “Carona
ao realismo”, and an academic and cultural recognition when two of his paintings were published in the book Bienal Cristal de Talentos, promoted by the International Book Biennial of São Paulo, both in 2010. In 2011, Millani once again won the 1st place in the Dessiner Wordpress National Contest on Realistic Drawings with the work named “Resiliência”, and has his work “Rosa Amarela” portrayed in ACRILEX Annual Calendar.
Currently, he paints full time in his studio, located on 1186, Antunes Ribas Street, room 107.
more >
37