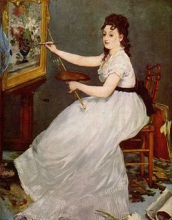 Eva Gonzalès (April 19, 1849 – May 6, 1883) was a French Impressionist painter.
Eva Gonzalès was born in Paris into the family of the writer Emmanuel Gonzalèz. In 1865, she began her professional training and took lessons in drawing from the society portraitist Charles Chaplin.
Gonzalès became a pupil of the artist Édouard Manet in February 1869. Manet is said to have begun a portrait of her at once which was completed on 12 March 1870 and exhibited at Salon in that year.
Like her teacher, Édouard Manet, she never exhibited with the Impressionist painters in their controversial exhibitions in Paris, but she is considered part of the group because of her painting style. She was Manet's only formal student and modeled frequently for several members of the Impressionist school.
more >
12