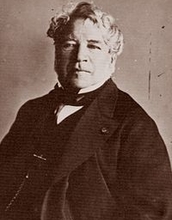 Eugène Louis Gabriel Isabey (22 July 1803, Paris - 25 April 1886, Montévrain) was a French painter, lithographer and watercolorist in the Romantic style.
After studying with his father and copying the Old Masters at the Louvre, he began sharing a studio with the landscape painter, Xavier Leprince (1799-1826) at Honfleur, in 1824, then moved to Saint-Siméon after Leprince's untimely death. The following year, he sent some landscapes to the Salon for his first formal exhibition.
In 1831, he was chosen to accompany a diplomatic mission to Morocco, led by the Comte de Mornay, but he politely refused. He had just returned from a short trip to Algiers, where he had painted scenes of the Royal Navy's campaign, and was concerned that the situation there was still too unsettled to make a lengthy stay. He was replaced by his friend, Eugène Delacroix, who created over 100 works that are now considered classics of Orientalism.
Shortly after, however, Isabey became a court painter for King Louis-Philippe and was named a Knight in the Légion d'Honneur in 1832. One of his best known paintings was done during this period, in 1840, depicting the return of Napoleon's remains from Saint Helena aboard the Belle Poule.
He favored historical paintings, genre scenes and landscapes, but also executed numerous canvases depicting storms and shipwrecks; possibly reflecting his own thwarted career plans. During a trip to England, he was known to have studied the works of J.M.W. Turner. He was especially skillful at rendering subtleties in darker colors; which might be called an early form of grayscale. He took in students on a regular basis; including Eugène Boudin, Johan Barthold Jongkind and Durand-Brager. In his later years, he turned from marine painting to historical scenes, usually of a violent nature, such as massacres, duels and robberies.