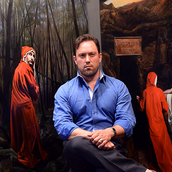 Born in 1973, fine artist Eric Armusik grew up in the northeastern coal region of Pennsylvania. Once one of the largest coal mining operations in the county, his hometown was a landscape riddled with the depressions of post-industry. In contrast to the blight was a diverse ethnic community strong in faith. What the community lacked in public art and museums it made up for it with churches on each city block. It was there that Eric had his first experiences with art, staring at the walls and ceilings at church on Sunday. The traditions and academic realism of Catholic religious paintings and artwork made a permanent impression that continues to influence his work today.

From an early age it was evident that Eric had artistic talents and at the age of 10 he won an art competition "Why I love living in the Wyoming Valley" that included students from all of the surrounding schools and his drawing of the Swetland Homestead was exhibited in the Franklin First Federal Building in downtown Wilkes Barre. His talents continued to win him numerous competitions and in 1990 he was awarded for his Contribution to the Arts by Wilkes University where he attended their Upward Bound program. In 1991, Eric attended Pennsylvania State University, where he earned a B. F. A. in painting, with and a minor in an art history focusing on Baroque art. In 1995 he received the Margaret Giffen Shoenfelder Memorial Scholarship for the Arts and finished his art history minor abroad for a semester in Todi, Italy. During his art classes there he drew from original paintings, architecture and sculptures by the old masters such as Michaelangelo, Bernini, Caravaggio, Rubens and Donatello. The rare opportunity to study masterworks by Baroque painters Caravaggio and Artemisia Gentileschi had a profound effect on the quality of his work and focused the inspiration he experienced as a child. After years of learning the techniques of the old masters Eric honed his skills at the Philadelphia studio of renowned international realism artist and portrait painter Nelson Shanks, Studio Incamminati. Today Eric's paintings have established him as one of today's strongest purveyors of traditional figurative painting. In 2010 he won the Chairman's Award for the Sixth International Art Renewal Center competition out of 1700 submissions from over 30 countries worldwide. Eric conducts several workshops in traditional painting each year and has attracted students from around the world that come to study with him.

Eric's work has been featured in such galleries and museums as the Salmagundi Art Club and the National Arts Club in New York; Allentown Art Museum; Philip and Muriel Berman Art Museum, Ursinus College; Monsoon Galleries; Hoyt Institute of Fine Arts; State Museum of Pennsylvania; and Reading Public Museum to name a few. In 2003, Eric was selected to represent the United States in Florence, Italy at the Biennale Internazionale Dell Arte Contemporanea where he exhibited several of his paintings. His paintings are in the permanent collections of Howard Tullman, The Trenton City Museum, Lehigh Valley Hospital and several churches private collections worldwide. His artwork has been prominently featured in publications like The New York Times, Wall Street Journal, Chicago Tribune, American Artist Magazine, American Art Collector, Victorian Homes, Old House Journal, and ArtMATTERS.

Eric is married to his soulmate, Gothic novelist Rebekah Armusik, and they have three beautiful children.
more >
49