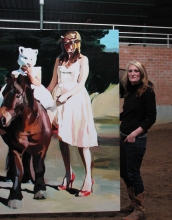 In 2003 she gained a 1st Class BA in Fine Art (Painting) from Chelsea School of Art. In 2005 she completed an MA in Painting at the Royal College of Art, where in 2004 she won the Amlin Prize for the most promising young artist.

In February 2006 she founded, exhibited and directed The Shaman Project, which like the nomads, is a moving, exhibition/event of music, art and performance. Following the great success of the first show in Salamanca, Spain, she then continued on a larger scale inviting 14 artists to take part in the second Shaman Project in Bilbao in 2006, where her performance with a live horse was screened.

The third exhibition to date, took place in North Wales, at Oriel Plas Glyn-Y-Weddw. Elinor Evans participated and directed a performance which related to her surroundings. She brought back the nostalgia of her home land, North Wales, and, using her typical subject matter, she portrayed the well known legend of Gelert. Accompanied by her faithful hound and muse, Picasso, and other animals (including a live horse) she brought the tale to life to the enjoyment of the large audience . With live flamenco music sung by Javier Santos, the whole performance was imbued with a Spanish flavour.

Evans has widely exhibited in Britain and Spain. She was selected for Art Review´s Ten of the Best B.A Graduates after graduating from Chelsea College of Art in 2003. She then won the Fine Art award in the National Eisteddfod in Wales.
More information..
more >
8