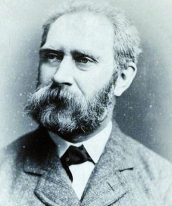 Edwin Longsden Long was an English genre, history, biblical and portrait painter.
Following the profession of a painter, he came to London and studied in the British Museum.
After visiting Spain, where they spent much time, he was greatly influenced by the paintings of Velasquez and other Spanish masters.
His earlier pictures, such as 'La Posada' (1864) and Lazarilla and the blind beggar (1870), were painted under Spanish influence. His first important pictures were The Suppliants (1872) and The Babylonian marriage market. In 1874, he visited Egypt and Syria, and subsequently his work took a new direction. He became thoroughly imbued with middle-eastern archaeology and painted oriental scenes like The Egyptian Feast (1877), The Gods and their makers (1878) etc.
He was elected an associate of the Royal Academy in 1870 and an academician (RA) in 1881.
more >
6