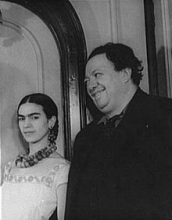 Diego Rivera (December 8, 1886 – November 24, 1957) was a prominent Mexican painter and the husband of Frida Kahlo. His large wall works in fresco helped establish the Mexican Mural Movement in Mexican art. Between 1922 and 1953, Rivera painted murals among others in Mexico City, Chapingo, Cuernavaca, San Francisco, Detroit, and New York City. In 1931, a retrospective exhibition of his works was held at the Museum of Modern Art in New York City.