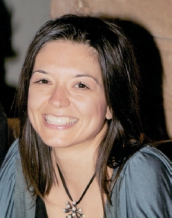 Dimitra Viveli is a practising artist who defines her work as art of deployed consciousness, a term employed to make reference to the conscious involvement in art as a field of exploration and reorganisation of a system – be it an individual or a social structure – through the negotiation of its structural meanings. In this context, art becomes a platform of creating functional meaning on various levels, and assuming responsibility for one's personal and social experience.

Dimitra studied at the School of Philosophy, National and Kapodistrian University of Athens, from which she graduated with a degree in English Language and Literature. She obtained her master's degree in Art and Design (Design for Interactive Media) from the Lansdown Centre for Electronic Arts, Middlesex University of London, and then pursued studies in fashion design in Athens and London (AKTO Art and Design College, Central Saint Martins College of Art and Design), as well as in visual and performing arts, at independent art studios.

Dimitra has worked in the areas of education, media, art, and business in Athens and London. In 2010, she founded the philosophy and art lab to dodeka and in 2018 she founded On Repetition, an open treatise in action, aiming at researching and exploring the concepts of uniqueness and complimentary, as well as their role and place in all aspects of human life and activity. In her artistic capacity, Dimitra has exhibited in Athens, Syros (Greece), London (UK), NYC ( USA), Buenos Aires (Argentina), and Basel ( Switzerland). As a practising artist, she daily employees art in exploring the systematicity of existence as an active continuum, in which various densities, ranging from soul to matter, seize the opportunity to interact and produce common results, which are shaped by an uninterrupted array of choices. It is in this process that she finds and develops new ways of increasing and enhancing the possibilties that experienced reality can accommodate.
more >
10