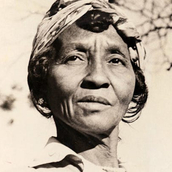 Clementine Hunter (pronounced Clementeen) (late December 1886 or early January 1887 – January 1, 1988) was a self-taught Black folk artist from the Cane River region of Louisiana, who lived and worked on Melrose Plantation.

Hunter was born into a Louisiana Creole family at Hidden Hill Plantation near Cloutierville, in Natchitoches Parish, Louisiana. She started working as a farm laborer when young, and never learned to read or write. In her fifties, she began to sell her paintings, which soon gained local and national attention for their complexity in depicting Black Southern life in the early twentieth century.

Initially she sold her first paintings for as little as 25 cents. But by the end of her life, her work was being exhibited in museums and sold by dealers for thousands of dollars. Clementine Hunter produced an estimated 5,000 to 10,000 paintings in her lifetime. Hunter was granted an honorary Doctor of Fine Arts degree by Northwestern State University of Louisiana in 1986, and she is the first African-American artist to have a solo exhibition at the present-day New Orleans Museum of Art. In 2013, director Robert Wilson presented a new opera about her, entitled Zinnias: the Life of Clementine Hunter, at Montclair State University in New Jersey.