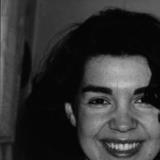 Born in Athens, Greece in 1959.
She studied painting at the Athens School of Fine Arts under D. Mytaras, L. Kanakakis, N. Kessanlis and M. Lambraki-Plaka.
She continued studying Interior Designing at the Fine Arts School of California State University of Long Beach.
From 1990 to 1992, on the Greek State Scholarship, she continued her studies in painting at the Ecole Nationale Superieure des Beaux-Arts de Paris, France.
Her works can be found in the Greek Parliament, the National Gallery, the Benaki Museum, the Museum of Florina, the Kouvoutsakis Pinacotheque, the Agricultural Bank of Greece Collection, the AGET Eraklis Group of Companies Collection, and other private museums and collections in Greece and abroad.
She has illustrated many calendars for private enterprises.
Her work was selected to represent Greek Contempoary Art during the Olympic Games of 2004.
On 22 September 2008, as part of the Enviromental Programme of the Goulandris Museum of Natural History and the SKAI Radio, she donated one of her works, which was auctioned and finally bought by the Greek Parliament. The proceeds were donated to the National Forest Fund.
She is considered as one of the most important landscape artists of Greek Contemporary Art , painting her works ‘’en plein air’’.
She has done numerous solo and collective exhibitions in Greece and abroad.

She lives and works in Athens.
more >
25