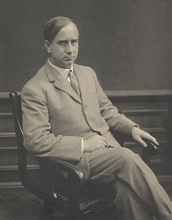 Charles Webster Hawthorne (January 8, 1872 – November 29, 1930) was an American portrait and genre painter and a noted teacher who founded the Cape Cod School of Art in 1899. At age 18, he went to New York, working as an office-boy by day in a stained-glass factory and studying at night school and with Henry Siddons Mowbray and William Merritt Chase, and abroad in both the Netherlands and Italy. In 1908 he was elected into the National Academy of Design as an Associate member and became a full Academician in 1911.

While studying abroad in the Netherlands as Chase's assistant, Hawthorne was influenced to start his own school of art. His winters were spent in Paris and New York City, his summers at Provincetown, Massachusetts, the site of his school. In addition to founding the Cape Cod School of Art, Hawthorne was also a founding member of the Provincetown Art Association established in 1914. While in Paris Hawthorne became a full member of the French Société Nationale des Beaux-Arts in 1917.
more >
3