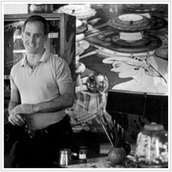 Charles Bell was born in 1935 in Tulsa, Oklahoma. Although Bell became interested in art at a young age, he never received formal training. In 1957, he completed a BBA at the University of Oklahoma, Norman, and did not decide to pursue an artistic career until the early 1960s after touring in the U.S. Navy. At this point in time, he was working in the San Francisco Bay Area, where he was drawn to the vibrantly colored paintings of Richard Diebenkorn and Wayne Thiebaud. Other artistic influences Bell has cited range from Pop art to the realisms of Jan Vermeer and Salvador Dalí. It was through the painter Donald Timothy Flores, however, that Bell learned technique, most notably trompe l'oeil, while working in the former's San Francisco studio. Under Flores, Bell painted mostly small-scale landscapes and still lifes, which earned him the Society of Western Artists Award in 1968.

In 1967 Bell relocated to New York, where he set up his first studio. Two years later he began showing at New York's Meisel Gallery run by Louis K. Meisel, who popularized the term "Photorealism" and helped establish the style as a movement. Bell embraced a photo-based technique in his work not only for the way it renders imperceptible details visible, but also for how he saw the close-up photographic view as emblematic of contemporary visual experience steeped in a daily bombardment of media imagery. Bell carried out his Photorealist works by photographing his subjects in still-life compositions and painting from his image.

Although Photorealism emerged as a national phenomenon, certain general qualities distinguish the coastal approaches to the movement. While the majority of the West Coast Photorealists preferred landscapes, particularly images of cars, trucks, and homes within an overall landscape, Bell, like many of the New York–based Photorealists, focused on still life. Bell transformed everyday subject matter by enlarging ordinary objects like Raggedy Ann dolls and gumball machines to an unusually grand scale. His subjects are typically familiar objects associated with childhood, consumer culture, and play, and thus capable of resonating with a broad audience. By focusing on larger-than-life subjects, Bell's paintings also deny narrative readings of his work. He has described his approach to selecting subject matter as more of an emotional than intellectual process. The hyperrealistic precision of his technique, combined with an exaggerated scale, produces a sensation that oscillates between familiarity and unfamiliarity, thus engaging the viewer sensually and emotionally. The exploration of light remains a persistent theme throughout Bell's oeuvre, from his earliest treatments of light on mostly opaque surfaces to his interest in reflected and refracted light on transparent materials, as seen in the gumball machine series (1971–77). These investigations gave way to his subsequent interest in objects illuminated from within, such as pinball machines, which he began in 1977.

Bell's work has been exhibited extensively both nationally and internationally. In addition to his ten solo shows at the Louis K. Meisel Gallery (notably 1972, 1974, 1977, 1994, 2006), his work was included in group exhibitions including the traveling Photo-Realism 1973 show, organized by the Louis K. Meisel Gallery (1973–78), and the traveling exhibition Assignment: Aviation—The Stuart M. Speiser Photo-Realist Collection, organized by the Smithsonian Institution (1983–85), as well as those at the Wadsworth Atheneum, Hartford, Connecticut (1974); Tokyo Biennial (1974); Guggenheim Museum (1977, 1981); Museu de arte moderna de So Paulo (1995); and Deutsche Guggenheim, Berlin (2009). Bell died in 1995 in New York.