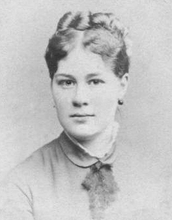 Cecilia Beaux (May 1, 1855 – September 7, 1942) was an American society portraitist, in the manner of John Singer Sargent. She was a near-contemporary of American artist Mary Cassatt and also received her training in Philadelphia and France. Her sympathetic renderings of the American ruling class made her one of the most successful portrait painters of her era.

Her reputation hit its peak during the 1930s when she received several major awards, including the Gold Medal at Exposition Universelle, Paris, in 1900; had two retrospective exhibitions; and published her autobiography. In 1933, First Lady Eleanor Roosevelt presented Beaux with the Chi Omega fraternity's gold medal, for “the American woman who had made the greatest contribution to the culture of the world.”
more >
8