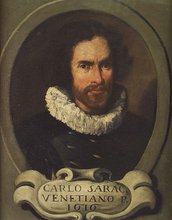 Carlo Saraceni (1579 – 16 June 1620) was an Italian early-Baroque painter, whose reputation as a "first-class painter of the second rank" was improved with the publication of a modern monograph in 1968.

Though he was born and died in Venice, his paintings are distinctly Roman in style; he moved to Rome in 1598, joining the Accademia di San Luca in 1607. He never visited France, though he spoke fluent French and had French followers and a French wardrobe. His painting, however, was influenced at first by the densely forested, luxuriantly enveloping landscape settings for human figures of Adam Elsheimer, a German painter resident in Rome; "there are few landscapes by Saraceni which have not been attributed to Elsheimer," Malcolm Waddingham observed, and Anna Ottani Cavina has suggested the influences may have travelled both ways. Read more...
more >
3