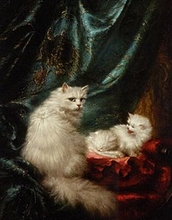 Kahler was born in Linz. From 19 October 1874 he studied at the Academy of Fine Arts, Munich, with Ludwig von Löfftz and Wilhelm Lindenschmit the Younger. After the end of his studies at the Academy, he spent some time studying in Paris, before settling in Munich.

Between 1881 and 1888 he exhibited his works in Berlin, Munich and Vienna. In 1885 he emigrated to Australia, and worked until 1890 in Melbourne, where he painted three pictures of the Melbourne Cup. In one of these paintings, The Betting Ring, every person in the crowd is an individual portrait.[1]

He later emigrated to the United States. In 1891, commissioned by Kate Birdsall Johnson, he painted the picture My Wife's Lovers depicting 42 cats, which became extremely well known as a published print.[2] From the time of this work he became increasingly known for his paintings of cats.