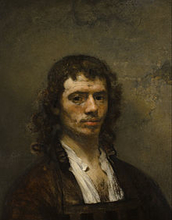 Carel Fabritius (1622-1654)
The name Fabritius comes from the Latin 'faber', craftsman. Possibly the artist adopted the name in his early years when he may have begun his career as a carpenter. He probably learned to paint from his father, Pieter, who taught at Beemster. In 1641, Fabritius entered Rembrandt’s studio in Amsterdam as an apprentice, where he remained for several years. From 1645, Fabritius was active as a master painter in his own right, first in Beemster and after 1650 in Delft. He died there in 1654, a victim of the explosion at Delft’s gunpowder store that devastated a quarter of the city. Fabritius was one of Rembrandt's most promising pupils. He painted portraits and developed the use of deceptively real trompe-l'oeil effects.
more >
4