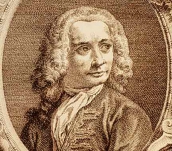 Giovanni Antonio Canal (1697 - 1768), known as Canaletto, was born in Venice, the son of a theatrical scene painter. He was very influential, famed for his precisely depicted and evocative views of the city (vedute). Canaletto's early pictures for local patrons are his most accomplished.

He found that providing formulaic paintings for tourists was very lucrative. These, still highly skilled works, were produced by him often in collaboration with an organised workshop. They usually record the lavish Venetian public ceremonies.

Canaletto was favoured by English collectors. He visited England repeatedly between 1746-56. His most important assistant was his nephew Bellotto, who became an accomplished artist. Canaletto often made meticulous preparatory drawings. He may have used a camera obscura for topographical accuracy in creating some of his designs, but he always remained concerned with satisfying compositional design, not simply slavishly recording views.