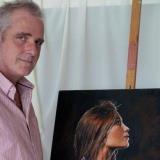 Barry Westcott is a British artist He has endeavored in his recent work to capture the essence of the old Cyprus, its history, people and culture, so fragile and threatened yet fiercely protecting and preserving traditions and heritage. This has inspired Barry to consider a bygone era and focus on the buildings around the old town of Nicosia now being lost due to development or neglect.

He has been heavily inspired by the light of Cyprus, so intense that the white appears almost a bleached white, shadows are sharper and there are fewer mid-tones. His paintings embody the contradiction of light versus dark, the contrast of sunlight and shadow; it is not always about what it is clearly visible but what lies in the shade that triggers our interest, curiosity and emotions. As in the case of the ancient owner of a small shop, a business which has been in the family for generations, sitting outside his building now crumbling from age and disrepair, the deep shadows inside the shop guarding the treasures held within to be discovered by those who look hard enough.
His work entreats the beholder to dig deeper into the painting, to challenge the shades to discover their inner secrets. The artist believes that in a painting, no matter how long you have been looking at it, you should always find some new and surprising feature. A painting is not just a piece of wall furniture but something you want look at and see, a talking point, a memory or the way it makes you feel.
Having always been a lover of the sea Barry also sources deep inspiration from the Mediterranean, its moody temperament throughout the seasons, the beaches, the clear and astonishing waters presenting a myriad of different colours, the volcanic rocks with their timeless forms sculpted over centuries by nature’s strongest forces, emerging like statues from its crystal depths, enticing him to also express such enigmatic beauty on canvass.
more >
24