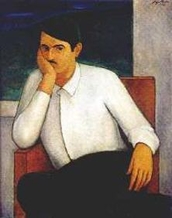 Born in Güines in 1904. Admitted to San Alejandro Academy when he was twenty one years old, but as all avant-garde painters—among them Victor Manuel, Arche, Domingo Ravenet and others—he distances himself from its rules trying to avoid classical themes to get involved into the Cuban reality.

The Tavern, The Washwomen, Portraits of a Family, Portrait of the Artist’s Mother, Self Portrait, Christ’s Burial, among others, constitute his most intense work and although he was unable to show it while alive, it did remain as his permanent exhibition when in 1935 it was revealed to the public by his colleague Jorge Arche.

His work was small due fundamentally to his standards as a creator which compelled him to try again and again. His easel work is considered as a definitive work within the Cuban painting of all times.

According to his formation and his generational preoccupations, Aristides is inserted in the first Movement of Cuban Modernism.

He left some literary work consisting of 17 untitled short stories, written in 1930, published posthumously in 1960.

Aristides Fernandez died in 1934 at the early age of 30 years. His paintings and drawings, known by his friends, were only shown after his death.

According to Lezama Lima, his work is "a small island within the Cuban plastic art, an inciting and enigmatic point".
source
more >
2