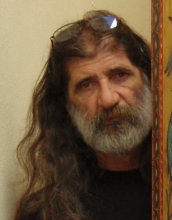 Painter and Iconographer.
Born 31 OCT 1950 - † 15 AUG 2014
Following always his beliefs and his vision he left Greece to study the Art of Painting in the “Academia di Belle Arti di Napoli”. After he graduates he moves to Germany where he stays for another 3 years painting and exhibiting.

After returning from Germany, he devotes his life in painting and exhibits his works all over Greece till today.

Byzantine Iconography comes to express other hidden aspects in his character that had to deal with solitude, isolation and devotion.

He collaborates for 7 years with the Hellenic Cycle of Collectors painting exclusively icons for them in his studio where he occupied 15-20 skilled assistants in iconography.

In 1998 the Bureau of Byzantine Antiquities gives its written approval to Antonios Fragkos to do the full iconography of a Byzantine Church of the 16-17th century located in his maiden village Livargi (www.livartzi-achaias.gr), at the Prefecture of Achaia in Peloponnese. In the meantime he does the iconography of two small churches, a Byzantine one of St. Theodore and a private one of St. John the Baptist, all in the same area. He also paints portable icons using the same old method of the egg and tempera.

Comparing the themes of his paintings to his icons, we discover two extreme personalities, the one of the radical rebel and the other of the monk. Stimulated from life itself his paintings express cruelty, brutality and provocation, while his icons lead the observer to paths of serenity and mysticism.