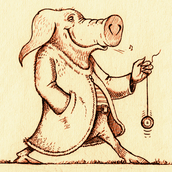 andREVANbuuren (Nieuwveen 1951) has been a passionate artist since he was able to hold a pencil. He initially worked in pen and ink, but when he discovered the art of painting around the age of twenty he understood that he belonged behind the easel. He developed a unique style that has its roots in almost all figurative paintings from the Renaissance to the present. Admired painters such as Willink, Melle, Bosch, Steen, van Mieris, Johfra and Dali, without becoming a slavish imitator, have left an unmistakable mark on his work.

He paints in a refined technique primarily to shape his imagination, but ultimately mostly for fun and that can be seen from his very laborious paintings. Over the years he exhibited mainly in the west of our country and his work has found a place in numerous collections in the Netherlands, France and Germany.
more >
17