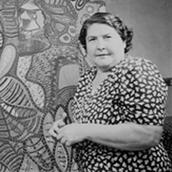 Amelia Pelaez entered San Alejandro at the relatively late age of twenty, graduating with honors in 1924, At San Alejandro she was one of Romañach's leading students in the areas of drawing, color, and landscape. The year of her graduation she and her colleague Maria Pepa Lamarque held a two-person show at the Association of Painters and Sculptors in Havana, where Pelaez exhibited a series of romantic landscapes typical of her early work. In the summer of I924 she visited New York on a travel grant and studied at the Arts Student League for six months. A more substantial grant from the Cuban government sent her to Paris in I927 for the purpose of studying French museums and academies.

In Paris, Pelaez attended drawing and art history courses at La Grande Chaumiere, the Ecole Nationale Superieure de Beaux Arts, and the Ecole de Louvre. She also drew and painted at the Louvre. She obtained what she considered her most important formal training from Alexandra Exter's courses in design and color theory in which she enrolled between 1931 and 1934. She has also acknowledged her debt to the art of Matisse, Braque, and Picasso in developing at this time a personal version of synthetic cubism. Her Parisian stay culminated with a one-person show at the Galerie Zak in 1933, where she presented thirty-eight paintings and gouaches of landscapes, female figures, and still lifes with an introduction by Francis de Miomandre. The following year she participated in the Exposition de Livres Manuscrits at the Galerie Myrbor with her illustrations for Leon Paul Fargue's Sept Poemes. Before leaving Paris she published in La Volonte an article on modern Cuban painting entitled "Les peintres cubains in Paris."

Pelaez returned to Cuba in 1934, making a studio at her home in the Vibora district of Havana. Although she lived and worked in relative isolation, she was an active participant in the vanguard (1927-38) and the classical (1938-51) phases of Cuban modernism. For two years after her arrival she concentrated on drawing, working out her understanding of European modern art and formulating a new subject matter based on her rediscovery of Cuba. She returned to painting in the late 1930s with still lifes representing Cuba's flora in an austere version of cubism. Around 1940 she developed her signature style by enriching her cubist vocabulary with arabesques, bright color areas, and elaborate baroque compositions derived from nineteenth-century Cuban architectural decoration and furniture design. She found in her immediate environment--her home, garden, and neighborhood--a new source for artistic inspiration and cultural expression. She helped make colonial architecture a symbol of cubanidad and expanded on the nineteenth-century tradition of the use of tropical fruits and flowers for the same purpose. She also represented abstracted female figures at rest in intimate interiors that also allude to a particular way of life.

In the 1950s Pelaez turned toward greater abstraction and geometric simplification. From 1950 to 1962 she dedicated much of her attention to decorating and designing ceramics and making murals. Two of her outstanding mural projects were one in ceramics for the Tribunal de Cuentas in 1953 and another in tessera (now destroyed) for the hotel Habana-Hilton in 1958. During the 1960s, she concentrated again on oil painting, returning in part to the elaborate arabesques, brilliant colors, and still-life themes of her 1940s work.

Pelaez began to exhibit regularly in Havana in 1918, and after her one-person show at the Lyceum in 1935 she became one of the leading representatives of the vanguardia. She held numerous one-person shows during her lifetime and has been the subject of major retrospective exhibitions at the Museo Nacional in Havana 1968, the Cuban Museum of Art and Culture in Miami 1988, and the Fundacion Museo de Bellas Artes in Caracas 1991. She participated in most of the National Salons held in Havana and won awards at the salons of 1935, 1938, 1956, and 1959. In the 1940s she began to exhibit in the United States and Latin America, gaining a measure of international recognition which today is on the increase. Her paintings and ceramics are in numerous private and public collections in Cuba, Latin America, and the United States. In the United States there are important examples of her paintings in the collections of the Museum of Modern Art in New York and the Art Museum of the Americas in Washington. D.C.
source: Cubanet
more >
2