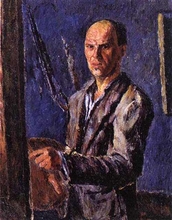 Drevin was born in Cēsis, Latvia. He attended art school in Riga under Vilhelms Purvītis and first came to Moscow in 1914. He studied under Kuzma Petrov-Vodkin. Since 1917 he worked in the Fine Arts Department of the People’s Commissariat of Education. Between 1920 and 1921 he was a member of the Inkhuk but later left, together with Wassily Kandinsky, Kliunkov, and Nadezhda Udaltsova, because of the Constructivist-Productivist stylistic manifesto urging the rejection of easel painting. Drevin became a professor of painting at Vkhutemas. In 1922, he was sent to work the First Russian Art Exhibition at the Van Diemen Gallery in Berlin. He travelled across Russia, to Kazakhstan Ural, Altai and Armenia creating a series of artworks of the Soviet landscape. These trips where organised and supervised by soviet art officials.

Drevin often painted a "brutal primitivism", lacking any political message or any purpose at all. His paintings have been compared to those of Vlaminck. Drevin's paintings intentionally were empty of illusionism and decorativeness. After a period of constructivist abstract painting, his style became progressively more realistic during the 1920s.

He was married to Nadezhda Udaltsova; their son was Andrey Drevin, born 1921, who became a sculptor.

Drevin was arrested by the NKVD on 17 January 1938, during the Great Purge, and executed on 26 February near Moscow. He was posthumously rehabilitated in 1957.