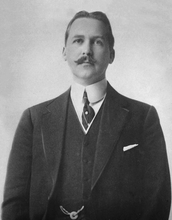 Albert Herter (March 2, 1871 – February 15, 1950) was an American painter, illustrator, muralist, and interior designer. He was born in New York City, studied at the Art Students League with James Carroll Beckwith, then in Paris with Jean-Paul Laurens and Fernand Cormon.
He came from an artistic family; his father, Christian Herter (1839–1883), had co-founded Herter Brothers, a prominent New York interior design and furnishings firm. Herter Brothers closed its doors in 1906, and Albert founded Herter Looms in 1909, a tapestry and textile design-and-manufacturing firm that was, in a sense, successor to his father's firm.
In Paris, he met a fellow American art student, Adele McGinnis. They were married in 1893 and had three children: Everit Albert (1894–1918), Christian Archibald (1895–1966), and Lydia Adele (1898–1951). The couple honeymooned in Japan, then returned to Paris for the first years of their marriage. In 1898 they moved back to the United States and built a Mediterranean-style villa, called "The Creeks", in East Hampton, New York, with a studio for each of them. Herter's mother built a mansion, "El Mirasol," in Santa Barbara, California, where the family spent the winters. Following his mother's death, Herter and his wife renovated the mansion and converted it into a boutique hotel. Son Everit and daughter Lydia also became artists although Everit was killed at age 24 in World War I. Son Christian became a politician, serving as governor of Massachusetts and later U.S. Secretary of State under Dwight D. Eisenhower. Adele Herter is remembered as a painter of still lifes and "Society" portraits. [source]
more >
1