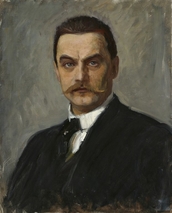 Edelfelt was one of the first Finnish artists to achieve international fame. He enjoyed considerable success in Paris and was one of the founders of the Realist art movement in Finland.

He influenced several younger Finnish painters and helped fellow Finnish artists such as Akseli Gallen-Kallela and Gunnar Berndtson to make their breakthrough in Paris. Among his students was Léon Bakst. The painting of Louis Pasteur won him the Legion of Honour in 1886 at the exhibition at the Paris Salon.

Edelfelt admired the poet Johan Ludvig Runeberg, who was a friend of the family. The company of Runeberg had a lasting impact on Edelfelt, who from time to time turned to scenes from Finnish history in his paintings. Edelfelt went on to illustrate Runeberg's epic poem The Tales of Ensign Stål. Albert Edelfelt was selected as the main motif in a Finnish commemorative coin celebrating the 150th anniversary of his birth, the €100 Albert Edelfelt and painting commemorative coin, minted in 2004. The reverse shows an embossed face of the artist.