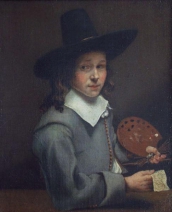 It was from his father and teacher, landscape artist Jacob Gerritsz. Cuyp, that Aelbert Cuyp (1620-1691) inherited his love of the animals that often appear in his landscapes. Cuyp began to develop his own style in the early 1650s: Dutch, yet exotic landscapes, river views, marines and equestrian paintings inspired by Italy. While Cuyp had never been to Italy, his paintings have that typical sunny, Mediterranean ambience. His landscapes are often hazy and atmospheric, and in these settings, his colourful figures stand out sharply. As one of the propertied burghers of his native Dordrecht, Aelbert Cuyp served in several administrative and ecclesiastical posts. He appears to have stopped painting in 1665.