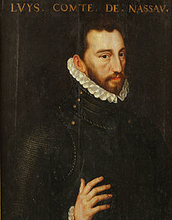 Adriaen Thomasz. Key (c. 1544-after 1589)
Painter Adriaen Thomasz. Key of Antwerp was a pupil of Willem Key, a distant relative. Key's work in the 1570s reveals considerable similarities with that of his teacher. While he made altarpieces for several churches in Antwerp, he was known above all as a portrait painter. Characteristic of his early portraits is the objective depiction of the subject. In his later work he placed increasing emphasis on the status of the subject, often prominent Antwerp burghers. After the Sack of Antwerp by the Spaniards in 1585, the Calvinist Key remained in his native town, although many of his fellow Protestants fled north.